Watermark — Indecline's Statue Titled The Emperor Has No Balls

To Be Clear... Putin-Loving Vagina-Grabbing Media-Bashing Crooked *45 is Unworthy of the "Politically Correct" Title 'President'!

The notion that Trump loves grabbing women by the 'p' is one of the many reasons why America should keep all the great p-words, such as president, as far away from his grasp as possible!

Since Donald Trump (*45) stands strongly in opposition to the ideals and societal benefits associated with acts of 'politically correct behavior' and claims conforming to said mindset takes too much time and too much effort perhaps Americans should give him a dose of his own medicine by ending the politically correct practice of referring to him as president.

There is no law that says the president of the United States must be addressed as such when speaking directly to that person or when speaking of said person in any setting including over broadcasting airways. And to be quite frank, many Americans take offense at the term president’s placement before the name of a person who is a self-confessed vagina grabber, a white nationalist hate monger, and who has taken over the White House aided by a foreign power in what appears very well may have been a political coup d'état acted upon our country––the United States of America!

When former President Barack Obama won the Presidency back in 2008 and 2012, he actually won!!! Swing state voter suppression and ballot tampering had not run amok in Obama’s favor. Trolls were not swarming the internet spreading lies on Obama’s behalf. The Democratic National Committee had not been hacked by a foreign nation to influence the USA’s election. A member of the Federal Bureau of Investigations had not slipped a poison pill into the election to steer voters away from Senator John McCain or Governor Mitch Romney prompting voters to vote for candidate Obama. And most of all President Obama did not invite a foreign government to hack his opponents in order to help him win either of his elections. And yet––following his swearing in many refrained from referring to him as President Obama and those who did continued to call him Obama or Barack Obama considerably more frequently than current constant reference to *45 as president at the time of this writing.

It is a bit unsettling that while observing politics today, it appears almost as though many in the news media cannot wait to speak the most important ‘p-word’ in perhaps the history of the world prior to saying illegitimate *45’s name. Watching some programs you can witness certain politicos/journalists use the word president in front of the illegitimate guy's name four to five times in one or two minutes! While it may be acceptable to many on the right, this undeserved recognition likely makes it difficult for other viewers seeking political information to continue listening to or watching stations that delve in this practice. Programming tending to include a variety of issues such as daily and nightly news broadcasts as well as day and night time talk shows lay the same undeserved praise at *45's feet.

Many of *45's followers appear to agree with his political correctness dismissal or to at least seem to accept his outlook on the subject. Which is probably the reason that crimes against minorities, women, and people of non christian faiths have spiked since *45 began his presidential candidacy by calling Mexicans rapist and drug dealers and promised, during his campaign, to start a deportation force.

One important aspect regarding the potency of a politically correct society is that this behavior bears importance when addressing any person in the world and includes showing respect to parents, and grandparents, and teachers and doctors, and military enlistees, and senators, and congressmen, and governors, and yes, even presidents.

When addressing parents, most children use terms such as mom and dad because that is what they are taught and doing so shows respect. Likewise children learn to address their grandparents as grandma and granddad (or a version thereof), their aunts and uncles using those titles, their teachers as Mr. or Mrs. and so forth. Parents are not likely to tell children they are teaching them to be politically correct when showing titled respect but the underlying notion lays the foundation for learning political correctness just the same.

To further emphasize the point being made here, all children do not join the Girl Scouts, or Boy Scouts, or become cadets in high school. Nor do they all grow up to become military enlistees and in fact, as everyone knows, most adults remain civilians throughout their lives. When not in the military, when choosing to remain a civilian, Americans are not ‘required’ to address any person in the military with a label other than that person’s name when opting for their attention. [Of course one could argue that (Continue in next column)


using civilian names to garner attention is not a requirement either.] Although the President of the United States is also the country’s Commander in Chief, unless you are in the military you are not required to acknowledge that position when addressing him [or her] using terms such as sir or madam or even president.

For the above stated reasons as well as the fact that *45 has shown time and time again that he does not deserve the title of the highest office in the land, even if he had been legally elected, many Americans refuse to honor him with the undeserving gift that is intended for U.S. presidents. With that spirit, many believe it would truly be great if folks, or at least those who do not support his radical actions against society, would simply just stop referring to *45 as our top guy by using the presidential title. He is illegitimate *45. The asterisk before the 45 is in recognition of the fact that not even his name deserves to hold that number in association with the lineage of United States of America's presidential count.

Taking this matter a bit further, due to the now apparent authoritarianism baked into *45's leadership style, Beatrice A. King, daughter of Reverend Martin Luther and Coretta Scott King, posted a list of items one should do or not do while fighting to save our democracy. At the top of the list that she posted to her Facebook wall King wrote: Don't use his name; EVER (45 will do). 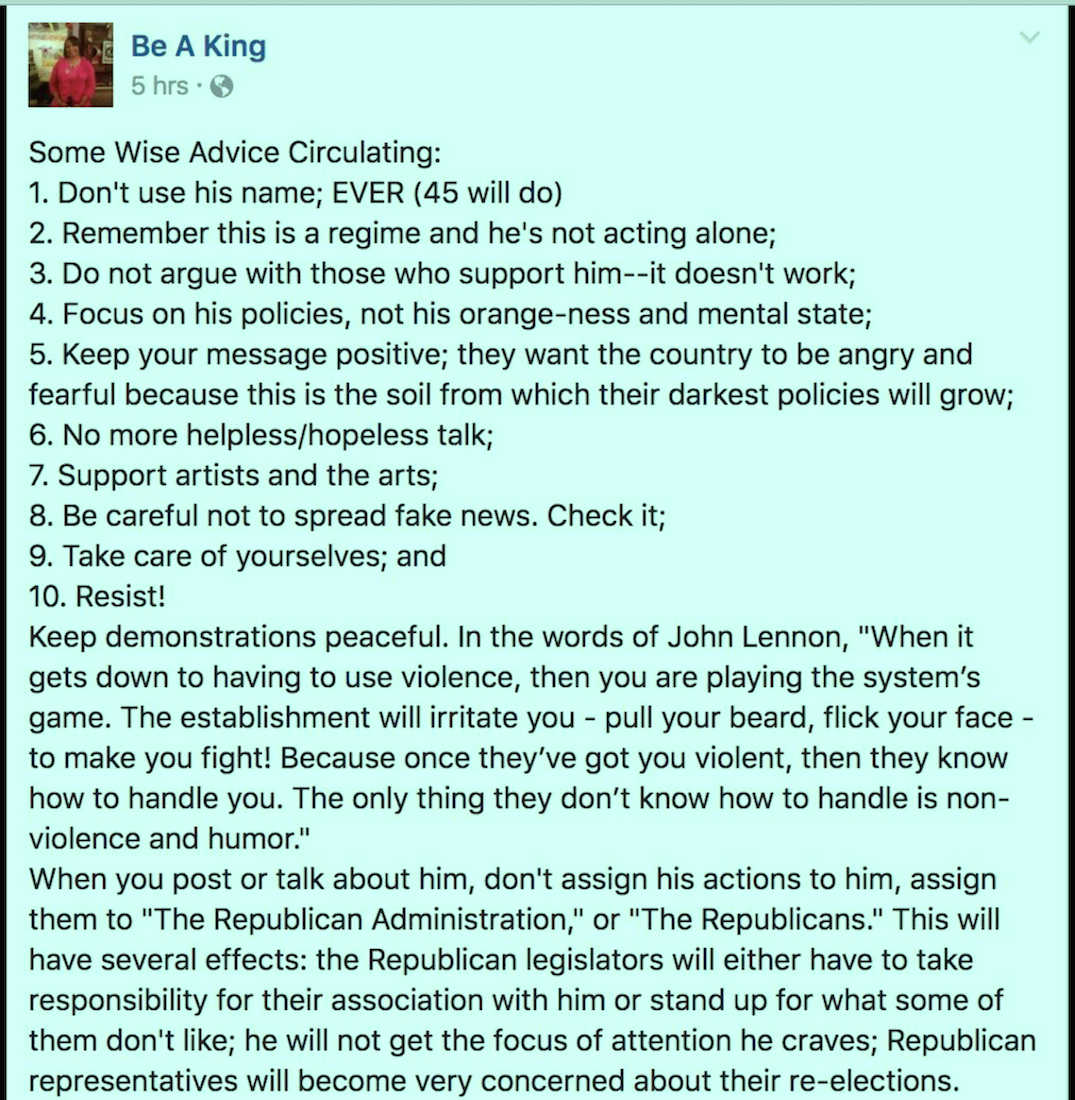 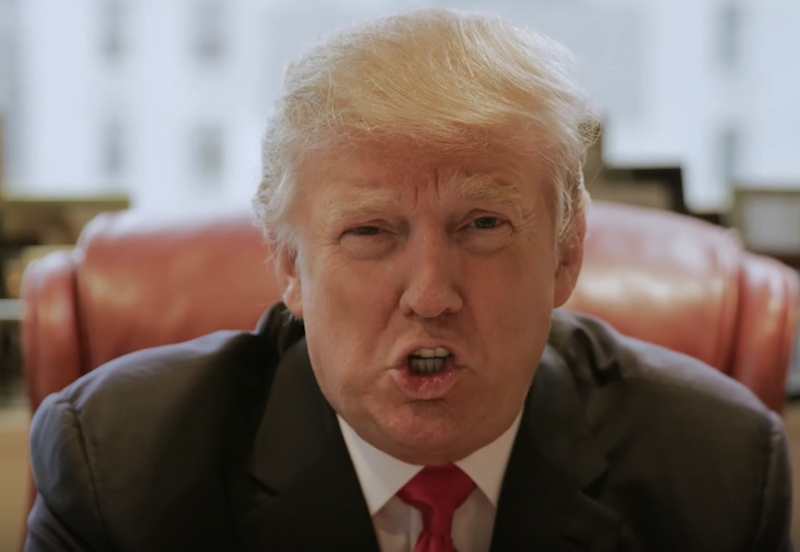 Feel free to bookmark this site to keep up with new posts, checking back regularly to catch new additions, and following Kitty@RipItToShreds on Twitter. You can also leave comments in the Rip It! Forum to the right!!